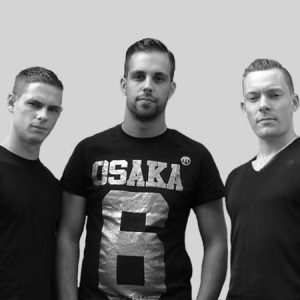 Founded in 2016, these 3 guys from the scene with a great love for hardcore and music in general, formed the DJ trio The Resonant Squad.

Jeffrey Beense, Maarten Sluis and Kevin Kenbeek began as many others, mixing tracks in their attic. Literally. One of the members, Speedy Lô, was in possession of a turntable, and that’s how all the magic started. From that moment on, the guys encountered certain people which could change their lives. The first booking was in for Speedy Lô, under the name of B-Shifter.

The performance was a success, which proceeded into a second booking!  But…a new booking also means a new DJ-name. From this day on, ‘New Age Movement’ was born.

With no knowledge whatsoever, the trio began producing their own tracks. This hobby eventually became a lifestyle, their music came in contact with a small crowd and the first couple hundred views poured in on thee different Soundcloud channels. This gave them the motivation to take this more seriously and resulted into higher quality music. Eventually, their tracks were shared on YouTube and Facebook pages.

Fast forward to 2014, the year in which their first produced tracks were played at a party. A once in a lifetime moment, hearing their own music echoing through a festival tent at Hardshock, this was something they would never forget. But it just wasn’t perfect. They still had some work to do.

One day, they received a message from an event planner. He would love to have them play at his party, if they were interested. It was time for their first performance. Decade The Halloween Edition, in a sold-out venue called H7 Warehouse in Amsterdam. Confident, but nervous, they went up on stage and showed the crowd all the effort and passion they put into producing tracks and learning new things they loved doing. And what a success it was! They got a lot of attention from producers, listeners, other upcoming/well known DJ’s and event planners. Now they knew they were getting somewhere.

At this point they have destroyed multiple parties/venues, which consist of Pandemonium, Ground Zero, Harmony of Hardcore ,Titanium Festival, Hellbound,  and many more! They even crossed the land borders and played Several gig in counties like Italy, Zwitserland and Germany!

One of the parties the gentlemen loved visiting was Pandemonium ,Retrospect. Rougher sounds, big Soundsystem, and killer tracks. When the day came they got asked to play there themselves, the answer was clear. Of course they wanted to!

Mentioned before, is the name ‘New Age Movement’, which still is something they stand for. They put old-school hardcore in a new jacket, and the enthusiasm for the heavy hardcore kickdrum sounds and structures is to be heard in their tracks. Mostly self-made content, but also catchy remixes of well-known classics is what they produce. Over the years they have learnt a lot about music, sound design, programs and are also capable of delivering high quality productions to the audience.

Three members with three totally different styles combined, which perfectly form together, bring you the music of The Resonant Squad.